Mining has suffered setbacks all over the world in the past few years because of green initiatives and fluctuating commodity prices. The pressing question that industry players are now asking is ‘how viable it is for them to continue in this industry and for how long?’ Crownsmen Partners provides its own take at the current industry situation.
For the purpose of this article, the North American Mining Industry only includes the United States, Canada, and Mexico sectors. Mining is defined as the activity through which metals and minerals are extracted from the earth which are then used for further advancement in society. According to industry experts, the leading North American players include Grupo Mexico S.A.B. de C.V., Freeport-McMoRan Inc., and Barrick Gold Corporation, which are ranked in the top 40 global mining industry leaders. Centers for Disease Control and Prevention, explains that the Mining Industry follows two key mining exploration procedures, which are surface and underground mining. Surface mining is seen predominantly in the current Mining Industry. Both exploration procedures have specific practises used for the extraction of certain types of metals or minerals. The combined markets of US, Canada and Mexico produced minerals with a total value of $154.8 billion in 2016. 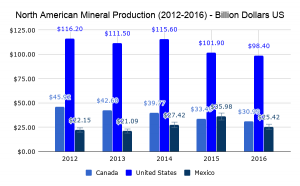 Source: Statistics Canada, Servicio Geológico Mexicano, U.S. Geological Survey
The data above shows the total annual production of minerals which include metals, industrial minerals and coal, between 2012 to 2016 for Canada, United States, and Mexico. The compound annual growth rate of the mining Industry when calculated in the local currencies in each sector was estimated to be -3.27% for the United States, -2.22% for Canada, and 10.2% for Mexico. All sectors were impacted by global commodity prices, which have not yet rebounded from the 2011 downfall; however, they have recovered slightly in 2016.
The Mining Association of Canada’s (MAC) article titled “Facts & figures 2017” explains the volatility of global commodity prices, which are affected by the global supply and demand of mining commodities. MAC indicates China to be a country that drives the global supply and demand due to the amount of metals they need imported into the country.
A United States Geological Survey report titled “Mineral Commodity Summaries 2017” describes that the United States production decrease is affected not only by commodity prices, but also the closures of coal mines and processing facilities. The coal mine closures in the United States are a result of the falling domestic demand of coal. The primary reason for the fall in demand is the fact that there is a conscious shift from coal-fired power plants to gas-fired power plants in the power generation sector. Using natural gas and other renewables for power generation turns out to be more cost-effective for companies in the long run. Another reason resulting in reduced demand is government initiatives to reduce emissions. The government now requires coal-fired plant operators to install emission reducing equipment which is costly. Since the return on investment is low it makes economic sense for companies to simply shut down the plants.

The chart above shows the North American Mining Industry breakdown of the global exploration budget in 2016 between Canada, United States, and Mexico. According to the Mexico Mining Review (MMR), the global exploration budget was $6.89 billion with North America holding 27.2% or $1.87 billion of the total budget. According to industry experts, Canada’s safe political system and attraction for mining possibilities, has made the country the world’s leading destination for investments, holding 14.1% of the global exploration budget. The United States and Mexico Mining Industry each hold a value of 7.3% and 5.8% respectively of the total exploration budget totalling to $903 million (MMR).
Canada is recognized globally for their leadership in safety, sustainability, and being more politically stable in comparison. It is also listed as the global leader for producing the mineral called potash according to MAC. The National Mining Association (NMA) of USA shows the United States produced approximately 1.3 million metric tonnes of coal, which is the largest commodity the US produces, contributing 7.0% of production to the total global percentage as published in the “U.S. Percent Share of Selected World Nonfuel Mineral Production, 2017” Survey. Mexico’s leading commodity is silver, which has a 25.0% production share to the global market.

The North American Mining sector experiences growth, faces resistances, and carries trends at the global, national, provincial/state, and local levels of the industry. Globally, the volatility in the price of commodities are being raised from the frequent downward motion and the world economic growth is expected to rise to 3.6% in 2018 from 3.1% in 2016 (MAC). The world’s largest mining companies have been working hard to cut back costs and take the necessary impairments to support the continuing global demand for commodities.

According to MAC, Canada has one of the largest mining supply sectors globally with over 3,700 companies contributing many services to the Mining Industry, such as: engineering, geotechnical, environmental, and financial. The Canadian Mining Industry is located in a rich geological location which gives access to produce over 60 minerals and become one of the world’s largest mining nations (MAC). The industry directly employs 403,000 workers across the country for mineral extraction, smelting, fabrication, and manufacturing. To take control of the rising prices in commodities, Canada must address the challenge of the consistent drop in the global exploration budget, which dropped from $9.2 billion in 2015 to the budget of $6.89 billion in 2016 (MAC).

According to MMR, Mexico’s Mining Industry displays a potential for growth with the slight rebound in global commodity prices in 2016. The industry is preparing to become more cost efficient and productive with the ever-improving equipment. Mexico is facing obstacles due to a 20.9% decrease to global investments in 2016. In 2016, the expansion of the industry was 2.3% compared to the global expansion of 3.1%. Mexico collected a total of $400.0 Million US dollars out of the $6.89 billion, towards the industries investments. Mexico shows it holds a potential for growth in the Mining Industry and is seeking the increase in the global exploration budget to reach full potential.

MMSD & IIS (2002). Industry in transition a profile of the north American mining sector. Retrieved by https://www.iisd.org/sites/default/files/publications/mmsd_na_mining_profile.pdf

McKinsey & Company (2015). Downsizing the US coal industry: Can a slow-motion train wreck be avoided?. Retrieved from https://www.mckinsey.com/~/media/mckinsey/dotcom/client_service/metals%20and%20mining/pdfs/downsizing-the-us-coal-industry.ashx