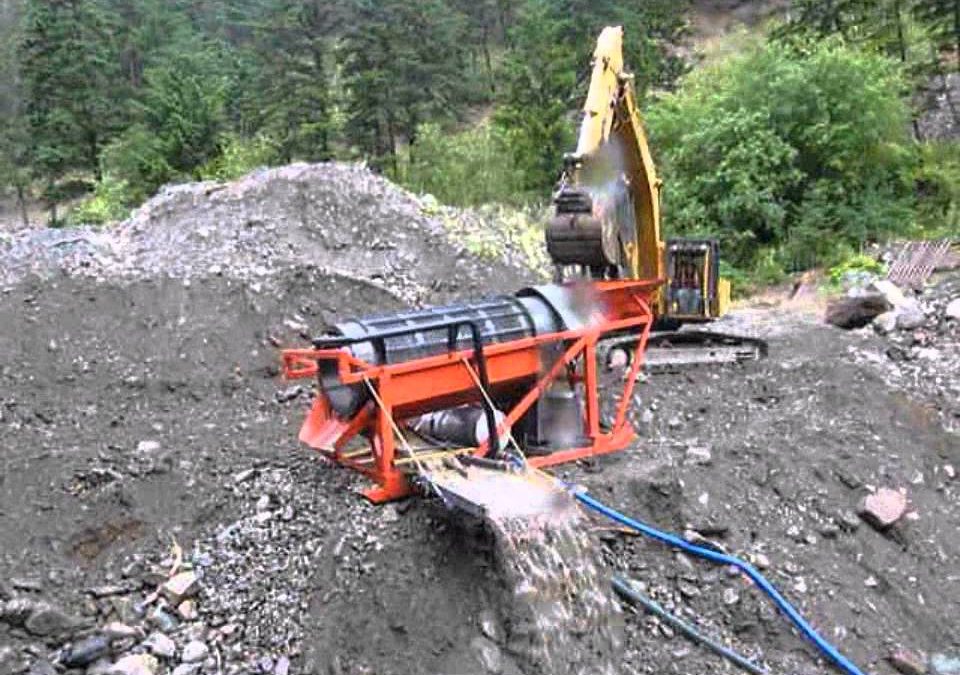 Resource rich BC has experienced economic boost because of mining operations in the past however, with increased oppositions highlighting environmental impacts, approximately only 1.0% of placer mining operations generate substantial profits, says Clair Schmidt, owner of a placer mining operation in Wells, BC. However, Crownsmen Partners believes that placer mining – the practice of mining of the stream bed where (alluvial) mineral deposits exist to extract gold and other valuable minerals, will see growth in the next few years. According to Clair, “our country is built on these resources, especially BC”.
The following chart shows the growth in gold sales by placer mines. 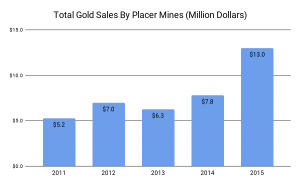 Source: Chief Gold Commissioner and Ministry of Energy and Mines

The gold sales have been growing at a compound annual growth rate (CAGR) of approximately 20.0% per annum. The gold sales grew substantially in 2015 however, the royalty collected by the BC government on these sales was only $64,965.0 (0.5%).

Like any mining operation, placer mining too has its set of pros and cons.

Clair Schmidt explains at the Quesnel Gold Show, which was in its 7th year, that before commencing digging, a lot of research has to be conducted and the history of the geography has to be studied in order to determine where to dig. The exploration process today has become more streamlined offering better odds of success. Placer miners conduct background research, study geological survey maps which show glacial history, geology, geochemistry and geophysics to assess exploration viability instead of straight away drilling a shaft into the bedrock and tunneling out from there. This approach is also less disruptive to the environment.
To save on costs and attain operational efficiency mines today are also moving to use renewable sources of energy to power electrical equipment which further reduces harmful impact on the environment. Rick Wittner from CMA also conducts site tours with First Nations, students and government officials to prove that they are environmentally friendly and are operating with a low footprint.

There is also a conscious shift from using harmful chemicals for gold recovery, for example; Northwestern University scientists have developed a new method for gold isolation which uses cornstarch instead of cyanide. This will not only provide cost benefits but will also ensure added safety during operations.

In terms of safety, there is added focus from placer miners to keep equipment and structures safe and in optimal working condition so as to reduce the effects on the environment. On the other hand the government has introduced stricter regulations like land and water regulations to ensure mining operations run in a safe and responsible way which protects the environment. In addition to this, placer mines are also required to obtain certain licenses to operate. For example they require a water use license and approval of a Class IV Mining Land Use Operating Plan before commencing operations.
Primary focus of the Quesnel Gold Show was gold recovery including placer mining which was attended by archaeologists and large corporations like Zenith etc.

Experts believe that moving forward the main struggle for placer mining will be the cost of machinery and overall operations. The new changes in the Health and Safety Codes after the Mount Polley incident will affect placer mining in BC. For example: there are increased operating costs already since equipment and other structures have to be frequently inspected by licensed and government approved electricians, mechanics etc.
Although BC boasts that its mining operations are one of the lowest emissions causing ones in the world, there is still opposition from general public including First Nation organizations like the First Nations Women Advocating Responsible Mining (FNWARM). However, the Mining Association of BC (MABC) is consciously moving towards introducing more green measures into BC mines and also participated in the recent Clean Energy BC’s Generate Conference to discuss the role of mining in the transition to becoming a lower-carbon economy. Clean Energy Canada also predicts that to develop new cleaner technologies like solar panels, wind turbines, high density batteries, electric cars etc. there is an increased need for responsible mining of metals like copper, silver, lead, zinc, gold etc. which are required to manufacture these new technologies. For example: an electric car could use up to four times the copper used in a conventional car.
As one of the leading producers of these metals in Canada, BC mines are still expected to play an important role in making BC a greener province.